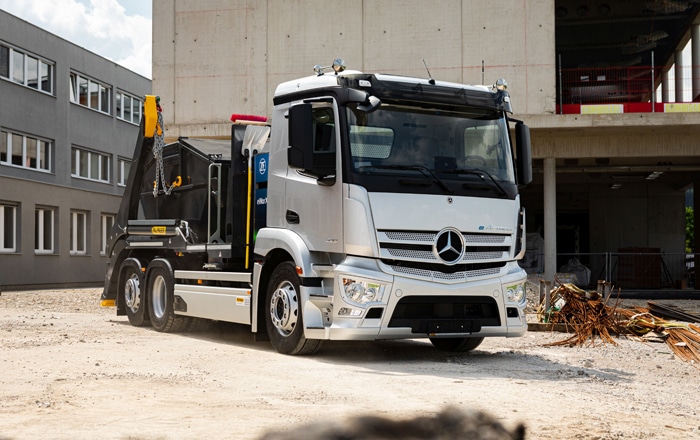 Volvo Trucks: First in the world to use fossil-free steel in its trucks As the world’s first truck manufacturer to do so, Volvo is now introducing fossil-free steel in its trucks. The steel is produced by the Swedish steel company SSAB and the heavy-duty electric Volvo trucks will be the first to include it. The steel from SSAB is produced using a completely new technology, based on hydrogen. […] Showcasing its extensive decarbonisation solutions at ITT Hub 2022 – taking place at Farnborough next week 11-12 May – Renault Trucks is also using the event to exclusively unveil its last mile e-mobility concept vehicle. Renault Trucks returns to ITT Hub with a line-up that showcases its commitment to decarbonise transport through vehicles, technology and […] Volta Trucks has revealed the strategic roadmap for its entry into the North American market, having already established itself as the leading European full-electric commercial vehicle manufacturer and services provider. The plan will see the first Volta Zero vehicles operating on Los Angeles’ streets by the end of next year.  Key points: Volta Trucks reveals […] Europa Road, part of leading logistics operator Europa Worldwide Group – which has its headquarters in Dartford, Kent – has continued to invest in its UK artic fleet, with the introduction of five new high spec Renault T range 6 x 2440 13 L trucks into its 50 strong fleet. This comes as part of the drive […] Wessington Cryogenics enjoys a global reputation for the design, quality and reliability of the storage vessels and tanks it manufactures. No surprise, then, that when it came to purchase its first truck, the North East company chose a brand whose name is synonymous with the same attributes – Mercedes-Benz. The 18-tonne Actros was supplied by […] Doncaster-based Foundation Packaging contacted its local Mercedes-Benz Dealer to enquire about its next FUSO Canter – and was delighted to be told a new curtainside-bodied vehicle could be delivered the following week! Northside Truck & Van had commissioned the 7.5-tonner for its own demonstration fleet, but was happy to let the vehicle go to its […] Scania UK has launched Scania Go, its brand-new premium used vehicle programme, designed to give customers the ultimate transparency and peace of mind.  Also, in a bid to increase its stock it is actively seeking used trucks, without part-exchange. Key points: Each vehicle is supported by a set of core benefits. These include a comprehensive […] Cambridgeshire-based Knowles Transport has announced the arrival of the first Renault Trucks on its 120-strong fleet. Supplied by Renault Truck Commercials, two T440 6x2s decked in Knowles’ striking orange livery have been added to the company’s line-up moving food, drink and ambient to retailers across the UK and Ireland. The addition of the first two […] Opening the order book now, with delivery from October 2022, Mercedes-Benz Trucks is launching the third generation of its OM 471 engine stage and fielding its best-selling heavy-duty commercial vehicle engine with a whole range of efficiency-enhancing innovations. Says Karin Rådström, CEO Mercedes-Benz Trucks: “With the third generation of the OM 471, we consistently focused […] Two-person delivery specialist Panther Logistics has invested in 35 new trucks as part of its continuing growth plans. Panther, based in Northampton, will replace part of its fleet with MAN’s award-winning TGX model –– as well as 20 new trailers. The vehicles, which are all DVS compliant, are fitted with five cameras for added safety, […]