TfL sets out bold vision for buses in the capital 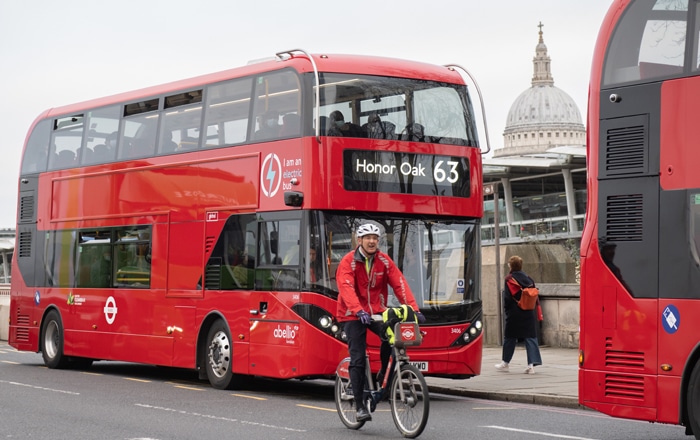 Transport for London (TfL) has published its long-term plan for buses, which will see the modern bus network attract more customers and help the capital become net zero by 2030. Buses are already the most used form of public transport in the capital, and TfL’s Bus Action Plan will create an even more attractive alternative to car use by focusing on five areas:

The plan can be seen in action on the route 63 from King’s Cross to Honor Oak, where new higher specification all-electric buses were launched last month. The buses bring together a range of customer-friendly features for the first time, including a more welcoming feel, USB charge points and mobile phone holders, a larger wheelchair and buggy area and better real time travel information on board.

A new bus lane on the New Kent Road section of the route is improving journey times and reliability in line with the plan. All vehicles meet TfL’s Bus Safety Standard and feature upgraded CCTV, enhancing security.

Louise Cheeseman, TfL’s Director of Buses, said: “We are excited to set out our bus strategy for the rest of this decade, which is all about creating a bus service reflective of our customers and their evolving needs, supporting a sustainable recovery from the pandemic, making London a net zero city by 2030 and improving people’s safety and wellbeing.?

“Investment in buses is imperative in dealing with the climate crisis and cleaning up the toxic air that is damaging our health. Our red bus network is fundamental to preventing congestion and, more widely, is a catalyst for unlocking homes and employment in London, as well as creating green jobs across the UK.

Buses are already an efficient, convenient form of public transport and London has the largest green bus fleet in western Europe, but we need to raise the bar. The Bus Action Plan sets out how we will meet the challenges now and into the future, making buses cleaner and greener, more efficient and an option for all our city’s diverse communities. Ultimately, it’s about making the bus the natural choice over the car.

“We can’t do it by ourselves, and in publishing the action plan today we’ll be well placed to start more engagement over the coming months on our shared objective of making London a better place to live.”

Emma Gibson, Chief Executive at London TravelWatch, said: “TfL is spot-on in setting out what needs to be done to get more people using the bus. Making it quicker to get from A to B is key to this, and improving journey times is a win-win as it saves TfL money which can be re-invested in bus routes, particularly in outer London. But getting more people using the bus also requires protecting existing routes, and supporting this and the wider ambitions of the Bus Action Plan can’t be done without long-term funding.”

“This will support the economic recovery and help tackle congestion, air pollution and carbon emissions. To make this happen, it is vitally important that TfL has the sustainable funding deal it needs to keep investing in, and promoting a return to, public transport post-pandemic.”

Harry Rushworth, Chair of TfL Youth Panel said: “Buses play a critical role in the lives of young Londoners; providing convenient, reliable, and affordable access to education and employment. It is therefore essential that, as London undergoes transformation in the aftermath of the pandemic, we maintain and improve this important service through investment in bus priority, accessibility and information measures.

“This not only improves journeys and provides new opportunities for young people, but it will help us to achieve our joint ambition for an active, safe, and sustainable capital.”

The bus network is central to life in the capital with around two thirds of residents using a bus at least once a week, and 90 per cent of Londoners using it in the last year.The bus network enables access to employment, education, health, retail and leisure activities. It is critical to the success of London, which is vital for the success of the wider economy.

Buses are the most flexible element of London’s public transport system, so TfL regularly reviews the bus network to ensure that services reflect changing demand and deliver value for money. Without sufficient, long-term capital support from the Government, the bus network itself and the priorities within the plan will be at risk.

Buses are the quickest, easiest and cheapest way to shift trips made by cars to public transport: buses carry up to 80 times the number of people as a car, making efficient use of road space, and cut emissions by both taking polluting private vehicles off the roads and offering up a green alternative. A high-quality bus service is vital in promoting active travel and preventing a car-led recovery.? Most journeys to a bus stop involve walking or cycling, and increased physical activity benefits people’s physical and mental health, helping relieve pressure on health services.

Cars are the largest source of road and rail emissions in London, and car traffic must drop by at least 27 per cent by 2030 to meet London’s climate change targets. The scale of these reductions is likely to require a fairer and more sophisticated road user charging scheme, which would only be feasible with a comprehensive?bus network.

The capital has one of highest number of zero emission buses in Europe, with 800 at present, and is on target to hit 10 per cent of the whole fleet this year. All new buses to the network are zero-emission and sustained Government funding could see all buses converted as early as 2030, taking 500,000 tonnes of carbon out of the transport system. Such funding from Government is critical if the benefits outlined in the plan are to be realised.

The benefits of investment in London buses are seen across the UK. TfL contracts support thousands of jobs outside London, with 3,000 roles in green bus manufacturing alone already created in Falkirk, Ballymena and Scarborough, where the buses on route 63 were made. These jobs are at risk however if TfL does not get the longer-term funding it needs.

As London works to make its bus fleet zero-emission, the costs for bus networks outside the capital to do the same will reduce. Within London, bus investment will help TfL achieve long-term financial sustainability, and support “good growth” in outer London, unlocking homes and employment.